Birthdays are the ideal time to buy Birthstone Crystals, Bracelets & Necklaces. The Scorpio birth sign lasts from 23rd October to 21st November and is the eighth astrological sign in the Zodiac.   The important crystal  Citrine is presented in a gift box making an ideal present for those born under the sign of Scorpio.  Each crystal used in Birthstone Bracelets and Necklaces have been chosen according to their Zodiac alignment and beauty. The properties of Turquoise Howlite  Bracelets and Necklaces are believed to portray the characteristics of the Scorpio sign. Birthstone Bracelets and Necklaces can be worn for special occasions or as part of everyday wear, they will brighten up your outfit nicely too as an added bonus.

Stylish and affordable, crystal bracelets are a great way to add colourful crystal to your look. At Crystal Age we have a fantastic choice of crystal bracelets, from exclusive sterling silver designs to inexpensive power beads. These bracelets make wonderful gifts and allow you to really brighten up your look. A crystal bracelet is also a great way to benefit from the healing power of crystals. As you wear the bracelet you are in close contact with the healing crystal all day. You can place the bracelet on the side of your body that needs healing and some people believe that having the crystal close to a pulse point also helps to bring out its healing powers.

Our birthstone crystal bracelets are a lovely gift. Each bracelet uses a crystal chosen for its strong connection to your star sign. They are a fantastic way to get in touch with your sign and centre yourself on the qualities that make you who you are. Birthstone jewellery is said to have a positive healing effect on you and help you be at your best. We have a full set of birthstone bracelets for the twelve star signs, including these examples.

If you were born in March you have a choice of some lovely birthstones. The two star signs that fall in March are Pisces and Aries. As with all the signs Pisces and Aries have a wide selection of birthstones linked with them so I have picked out the ones that I think are most in touch with the spirit of each star sign. Birthstones make lovely gifts and you can use them in lots of different ways. You can display your birthstone around the house, use them to meditate, as part of crystal healing or just hold one in your hand as something to focus on when you are trying to relax.

The first sign in March is Pisces, which runs from February 19th to March 20th. Pisces is symbolised by the Two Fish and ruled by Neptune. The Two Fish come from the Greek myth of how Aphrodite and her son Eros transformed themselves into fish to escape the monster Typhon. Fluorite, turquoise and aquamarine are three of the most beautiful Pisces birthstones. They are associated with the sensitive and imaginative yet prudent spirit of Pisces.

Aries is the second sign in March but it is actually the first sign of the zodiac. Aries is from March 20th to April 20th. It is symbolised by the Ram and ruled by the planet Mars. The Ram comes from the Greek myths of Phrixus and the Golden Fleece. A golden ram helped Phrixus escape to the land of Colchis. He then sacrificed the ram and its fleece became the famed Golden Fleece that plays a vital role in the legend of Jason and the Argonauts. The Ram was transformed into the constellation of Aries.

Birthstones make wonderful gifts and people born in February have a choice of some beautiful February birthstones. The two February star signs are Aquarius and Pisces. Both signs have a wide range of stones assigned to them so I have picked out the ones that I feel are best suited to these star signs. If you were born in this month, February birthstones are a great way to get in touch with the true meaning of you sign. They can be used for meditation, crystal healing or simply as a point to focus on when you need to relax.

Aquarius is the first sign in February and it is from January 20th until February 19th. Aquarius is a water sign and it is symbolised by the Water Bearer, often identified with the Greek mythic figure of Ganymede. Three of its birthstones are amethyst, hematite and jade. Each stone has a very different set of attributes but they all represent the free-thinking and sociable nature of Aquarius.

The second sign in February is Pisces, which runs from February 19th to March 20th. Pisces is symbolised by the Two Fish and ruled by Neptune. The Two Fish come from the Greek myth of how Aphrodite and her son Eros transformed themselves into fish to escape the monster Typhon. Fluorite, turquoise and aquamarine are three of the most beautiful Pisces birthstones. They are associated with the sensitive and imaginative yet prudent spirit of Pisces. 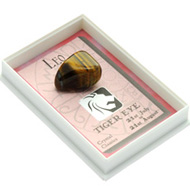 Zodiac birthstones are a wonderful way to unlock the power of crystals and start exploring your zodiac sign. Each of the twelve zodiac signs is associated with many different zodiac birthstones, from the most popular stones to obscure stones and stones specifically for people who are on the cusp of their star sign.

The idea of birthstones as we know them today grew out of Judeo-Christian traditions. Birthstones were first mentioned by Josephus in the 1st century AD and St Jerome in the early 5th century. They are described as set into the High Priest’s Breastplate and later as the foundation stones of New Jerusalem. People first started to wear zodiac birthstones as jewellery in 18th Century Poland and Germany. This soon became popular and many people all over the world keep their birthstone close to them or wear it as jewellery.

How To Use Zodiac Birthstones

There are many ways that you can use and enjoy your zodiac birthstone. Small birthstones like the one pictured above are particularly versatile. It is believed that keeping your birthstone within your aura will unlock its power, so the best way is to wear them as jewellery or keep them on your person. You can focus on your birthstone during meditation, use it to explore your star sign, access the positive attributes of your sin or just display it at home, preferably near your bed desk or main living area.